A lot of what we hear today about China involves pollution. As China has industrialized quickly, the smog in its major cities has increased, causing many people to be concerned about health ramifications. This concern is understandable, particularly if you’re coming from a developed country where air pollution is rare or non-existent.

It’s important to stay informed about the realities of pollution in the country when you’re making your decision about living in China.

Does every city in China have an air pollution problem?

Air pollution is an issue across China; however, the severity varies depending on where in China you’re talking about. In the south of China, the air quality is on average better than it is in the north. Likewise, in the Western provinces of Xinjiang, Tibet, and Yunnan, air pollution is very low.

The heart of the smog is also the heart of industrial China – Beijing, Tianjin, and Hebei. What this means functionally is that these areas have a higher concentration of air pollutants per cubic meter of air than is classified by the World Health Organization as safe.

While pollution levels change day to day, they’re typically higher in and around the aforementioned cities, which are concentrated in the northeast.

The map below provides a rough indication of these geographical differences. Pollution levels change hourly, and this air quality map is from May 29th, 2019.

Lots of sites provide active pollution maps, such as AQICN.org and Numbeo. 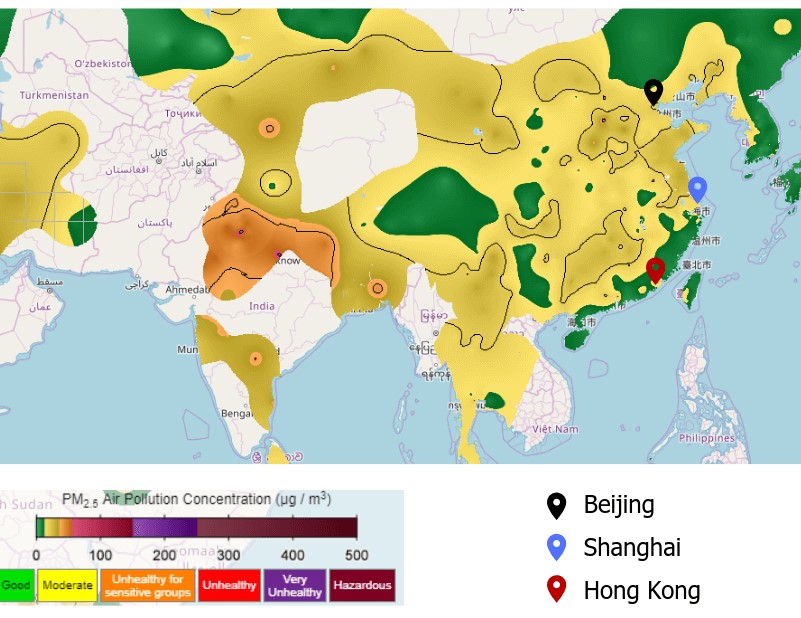 What’s it like living in a country with high levels of air pollution?

A comparable analogy to air pollution is the weather, it’s not a consistent thing. A whole range of meteorological factors combined with variation in the human activity that causes pollution means that pollution levels fluctuate quite a lot. Some days it’s so low that it’s practically non-existent and some days it’s extremely high.

Most of the time, you don’t notice it, and unless you have a pre-existing breathing condition (like asthma) you probably won’t either. When the pollution is high, it becomes more and more noticeable as a greyish haze or fog appears, and you might notice some unusual shortness of breath or a headache if you do outdoor exercise during times of high pollution.

If you choose to teach up in a northeastern city, you will definitely notice the pollution more often, and you’ll need to take steps to make sure that you remain healthy.

Will air pollution impact my health?

The implications for your health depend largely on the length of time you stay in China as well as any pre-existing health conditions that you have. For the average expat coming to teach in China, there is very little to worry about.

You could compare it to eating junk food. If you eat poorly and you’re overweight for the majority of your life, you will likely suffer some health consequences. But if you’re overweight for 5 years and then start eating better, you likely won’t see any long term health consequences. Likewise, with pollution, if you were born and raised in China and lived there for the majority of your life, you might suffer from some long-term health effects, but in the time span of a few years, the exposure is very unlikely to impact your health.

Is China doing anything about the high air pollution levels?

The short answer is yes. The long answer is that air pollution is largely a product of China’s massive economic growth and huge population, meaning a lot of air pollution is pretty much inevitable with the infrastructure that’s been in place for hundreds of years.

The pollution is the product of hundreds of millions of people striving to have a high (western) standard of living, combined with the fact that China produces a large percentage of the world’s consumer goods. By moving the production of a lot these goods to China, the developed world has also moved the industrial emissions and byproducts to China.

However, in 2017, the Chinese government began to force households to switch from fossil fuels such as coal to cleaner energy sources. This was part of a broader plan for decreasing pollution and becoming more environmentally friendly throughout the country.

In addition to changing policies on household energy use, the government has enforced policies to control power plants, industry, and transportation. It has worked so far – according to research, the average person’s exposure to PM2.5 (the most dangerous particulates in air pollution) has been cut by 47 percent. The energy conversions have also helped to prevent hundreds of thousands of premature deaths annually.

An air purifier that has been deemed “The World’s Largest Air Purifier” is located in Xi’an in Shaanxi Province. The tower was built in 2017, and it has produced more than 10 million cubic meters of clean air every day since its launch. 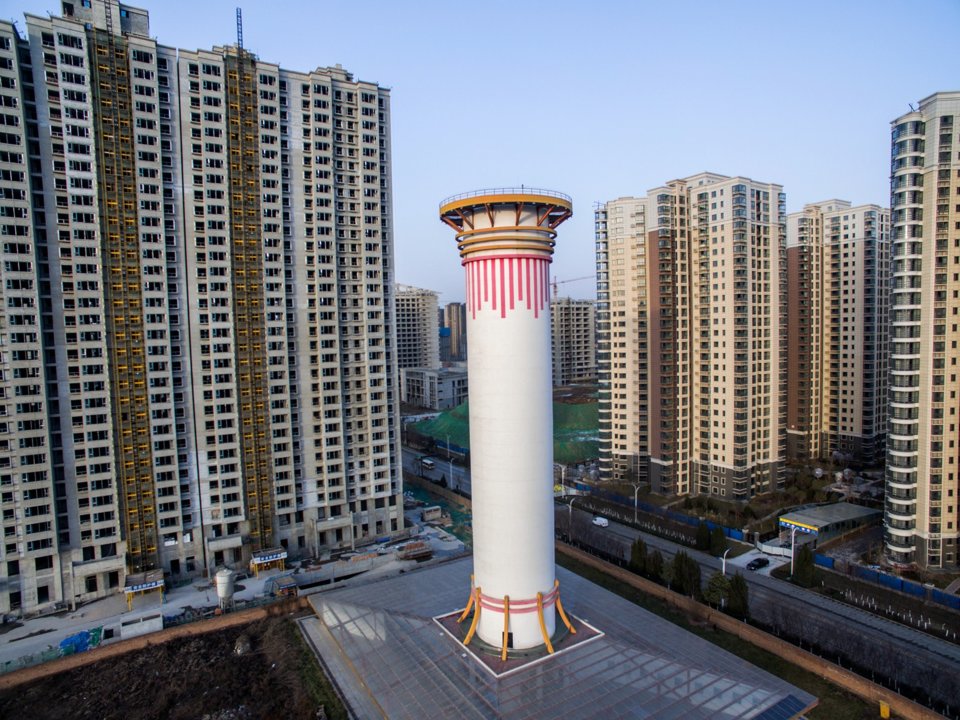 How can I track air pollution levels?

The Air Quality Index (AQI) for China is probably the most reliable source to track pollution levels. There are also many apps which you can use to access the AQI on your phone.

If you’d like a second opinion, the U.S. Embassy in Beijing and U.S. consulates in major cities track the air quality using twitter feeds, which you’ll need a VPN to access since Twitter is blocked in China.

What can I do to mitigate the effects of pollution?

If air pollution is really concerning you, there are a few practical things you can do to mitigate your exposure. 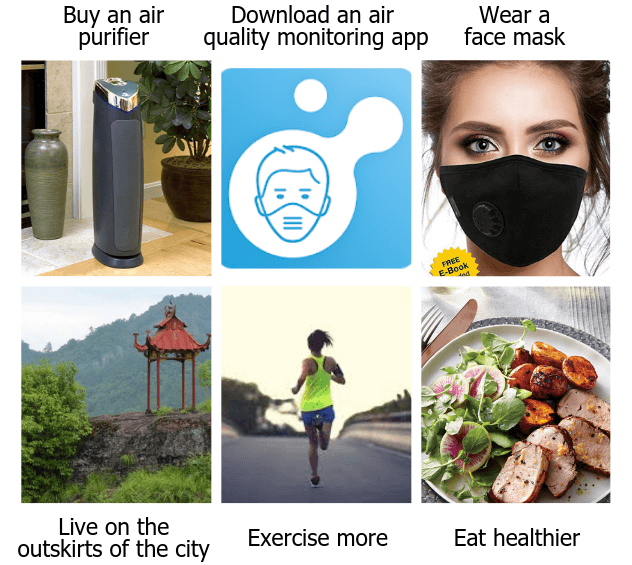 Which research has proven will greatly decrease the negative health effects that come along with air pollution. A purifier doesn’t have to be expensive, but make sure you do get one that is of high quality. You spend most of your time indoors – either in your home or at work. Many schools in heavily-polluted areas have installed air purifiers to protect student and teacher health.

Investing in an air purifier improves the air quality in your home by filtering out pollutants like dust, smoke, and pollen. If you have allergies, then airborne particles aggravate your allergies and make them worse. If you’re sneezing constantly, you may be allergic to the airborne particles that you can’t see or track.

By running this silent machine, you’ll ensure that the air in your apartment, where most people spend around 12 hours a day (factoring in time spent sleeping) is at normal levels. HEPA air filters typically cost between 3,000 and 9,000 RMB depending on the square footage you’d like to filter as well as the brand. (Note: There are a number of air filters on the market in China and most of the cheaper ones do not use HEPA filters. Since non-HEPA filters only filter out larger particles there is little point buying a non-HEPA filter, despite the fact that they will likely be cheaper.)

Use a pollution face mask when outside. Be sure to do your research on which mask to buy. Masks that fit securely around your face are going to keep out more pollutants than those that will sit loose. Most masks also have a rating that tells you how much of certain pollutants they can filter out. U.S. NIOSH or EU FFP ratings are the most reliable to use.

Most convenience stores in China carry masks rated to filter the smallest particles (Particulate Matter 2.5 micrometers AKA PM 2.5). PM 2.5 is the standard particle size that lurks in the air and can hurt your lungs.

You can find masks in stores and online with cute prints and cartoons printed on them. These are relatively cheap, usually between 15 and 30 RMB for a pack of 5, and they can be used a couple of times each. They can be a little uncomfortable to wear and they’re not very fashionable, so most people only wear these when pollution is high or when riding a bike in heavy traffic.

Checking these before leaving your home for the day is always a good idea, that way, you know if you need to wear a mask.

4. Exercise more (and do it indoors when needed)

Make lifestyle changes, such as exercising more. Be sure to check the AQI before exercising, but if you make smart choices about when you exercise, you’ll be able to stave off the worst effects of pollution by strengthening your respiratory system. It’s safest to exercise when the AQI is below 50.

Jogging outside in areas with more vegetation will also help to protect your exposure, as trees and plants are nature’s built-in air cleansers! Tip: exercise earlier in the morning when pollution levels are lowest and there is less traffic on the road. When the air quality is especially bad, it’s best to exercise indoors – preferably in a gym with an air purifier!

If you’re a runner, you may want to invest in a gym membership. When you’re running outside, you’re breathing more of the polluted air as you gasp for each breath during the run and recovery. Though running on a treadmill isn’t as fun as running outside, you’ll be doing your lungs a huge favor.

5. Live on the outskirts of the city

Even though it might be more glamorous to live downtown, being further outside of the city center where there’s more vegetation and fewer congested roads will lead to better air quality. You’ll save money on extra air filtration systems, and have more opportunities for safe outdoor exercise.

6. Eat healthier and make use of Chinese remedies

Increasing your daily intake of omega 3 fatty acids, vitamin C, anti-oxidants, and herbs such as ginger and mint will help your system to stay healthy.

The last recommendation is more of an unusual one. Chinese people have long used their diet to combat disease and sickness. Guess with one of the largest populations in the world, something is working, eh? Eating foods like garlic, wood ear fungus (木耳), radish, and winter melon helps to clean out the lungs.

This may sound like a no-brainer but you’d be surprised at how many people in China smoke despite the air quality. If you’re someone who has been smoking for a while, consider this one of the reasons to quit. Air pollution and smoking have very similar effects on the lungs so if you’re smoking and living in a heavily polluted city, the damage to your lungs is doubled.

Weigh the risks and rewards

Do your research and understand the risks of pollution, but don’t let it deter you completely from living in China. There are so many ways that you can protect yourself that there’s no need to allow this to stop you from jetting off on your next adventure to this beautiful country! 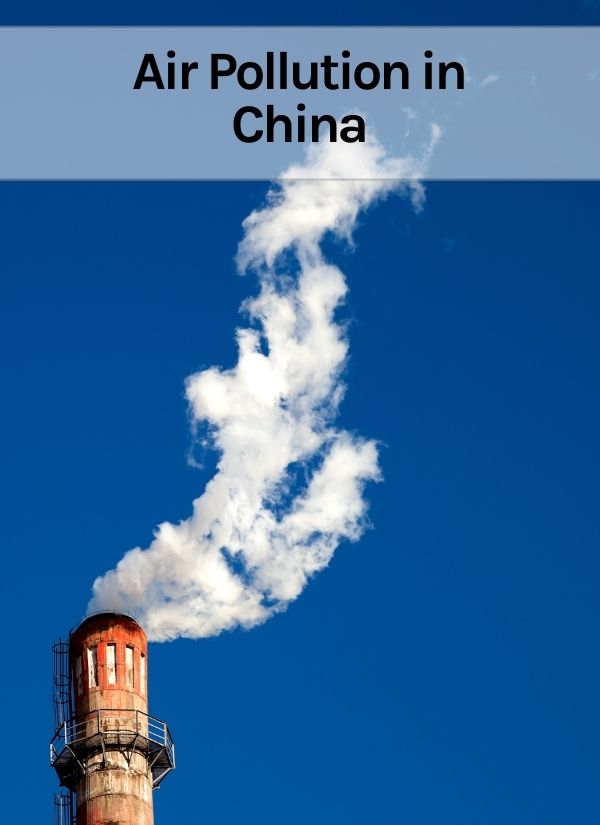